It’s no surprise that this county is known worldwide for cannabis. For decades much of the cannabis that came from this region needed no name other than “Humboldt.” In the same way that sparkling wine grown in Champagne is simply called Champagne, so is Humboldt synonymous with the finest cannabis.

As policy develops in California to regulate the commercial production of cannabis, called the Medical and Adult Use Cannabis Regulation and Safety Act (MAUCRSA), a major concern of Humboldt County’s small, independent cannabis-producing families is how to prevent the corporatization and corruption of this beloved craft. One solution often put forth by farmers is the creation of an appellation of origin. Based upon the French term appellation d’origine contrôlée (AOC), it translates to “protected designation by its origin,” or more clearly, “to be called by its place.” By creating an appellation of origin, rural producers can participate in the marketplace with a product that is not generic and capture economic value for traditional practices, quality standards and geographical boundaries. While other producing regions in California may desire an AOC, the case can easily be made that Humboldt’s top crop is already known by its place. The task is how to protect it.

Although it may seem like a long and daunting process to claim appellations of origin in California, it is not that far off. The state of California implemented a few concepts of AOC into the MAUCRSA. It is now state law that cannabis products cannot be marketed using a county name in which it was not grown in. In law, this is referred to as a geographical indicator (GI). While a GI is an important aspect of AOC, it is just one part of the big picture. As quoted by Justin Calvino, founding member of the Mendocino Appellations Project, “There is a difference between being grown in an area and grown of the area.” He is referring to the many other aspects including the regional micro-climate (watersheds, fog banks and other environmental nuances), the complex set of standards and the Traditional Knowledge (TK) component which includes the traditions and varietals passed down through generations of growers in the same region. Many cannabis farmers believe it is not enough to simply be located in the right ZIP code, as the state has done in legislation, but to create a true appellation with rigorous standards following the French AOC model. The American Viticultural Association (AVA) has a model that regulates geographical boundary lines and what percentage of wine must come from within those lines, but the AVA is an appellation designation lacking a defined set of standards. Due to the varied cultivation styles of cannabis, the GI is an important aspect but it could fall short of protecting and enhancing Humboldt’s revered crop without a rigorous definition of standards.

Recognizing that terroir is a critical component, there is a lot of work to be done to determine the standard growing condition. Due to the illegal nature of cannabis cultivation, many methods have been adopted in Humboldt not to grow the best quality cannabis, but to escape detection from law enforcement. Indoor cultivation and greenhouses are both examples where terroir is difficult to claim. If a farmer is controlling the climate, the soil temps and the soil itself is imported, how is terroir defined? If the growing environment is so controlled it could be moved anywhere, how is that going to qualify for an appellation designation? How much influence can the farmer have on the terroir? Who is going to decide these critical standards and how will they be implemented?

Farmers in Humboldt County are beginning to answer these questions by working together to promote the crop it is so well known for. Cannabis organically grown in the ground, using natural sunlight and at least having access to and interaction with the native soil form the baseline parameters for the process. The number of days without rainfall, temperature swings from day to night, altitude, coastal fog river influence, varietals (strains) and resistance to pests and pathogens are some of the data points farmers can use to begin documenting what makes the appellation unique. Also of important consideration are ripeness, harvest protocols, drying, curing and processing techniques.

MAUCRSA (SB 94) has language referring to the development of appellations of origin by January of 2021. In a surprising twist, the word “origin” was replaced with “appellation of standards, practices and varietals” in its latest draft. It is clear that, in Humboldt, both origin and standards form the foundation of a strong and defendable appellation designation and neither is strong enough without the other. 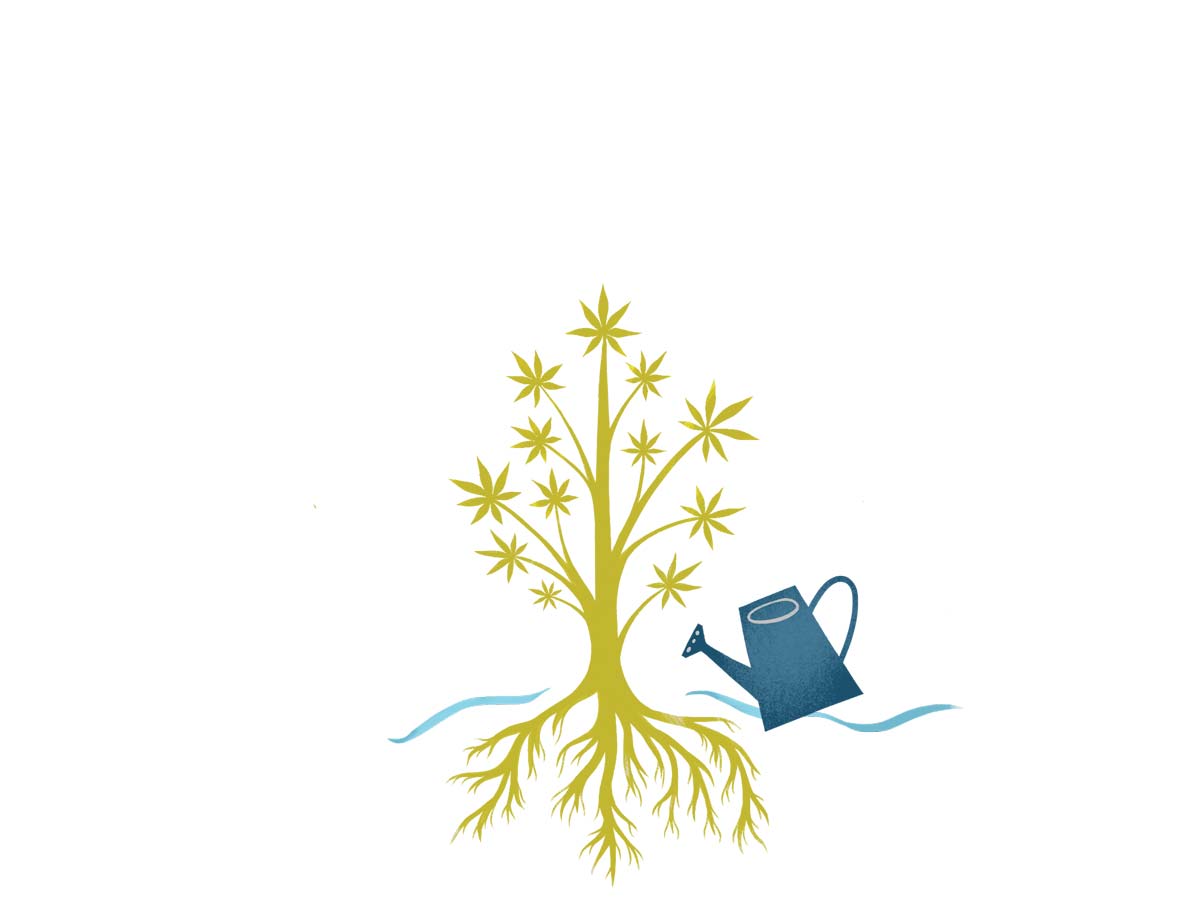 Humboldt County, with its ancient forests, steep terrain and six beautiful rivers, is already naturally connected by watersheds. Due to its remote location and back-to-the-land culture, Humboldt residents are intimately connected to the land and its influences. From community hubs and granges, farmers have started to organize and develop the framework for AOC. The traditional knowledge that has been passed from farmer to farmer, parent to child, and neighborhood to neighborhood is being written down. Genetics that have been cultivated and shared in watersheds throughout the past 50 or more years in secret are having their genomes mapped. The Humboldt County agricultural commissioner has implemented a state-of-the-art seal that bears the county logo, anti-counterfeit ink and a QR code for consumers to guarantee the authenticity of all cannabis products from the region. Groups such as The Humboldt Sun Growers Guild, Humboldt County Growers Alliance and the International Cannabis Farmers Association are all working on ways to secure an appellation that will protect and empower the Humboldt legacy. The ICFA has sponsored the creation of a Sun Grown Cannabis Commission in a bill that is being authored by Dan Levine in San Francisco (AB 1810). This statewide commission will take a major role in identifying geographical boundaries, shaping standards and launching a marketing campaign to highlight the features of sun grown cannabis. ICFA has also created a rubric for grading and sorting that outlines the baseline standards of cannabis inflorescence. The Humboldt Sun Growers Guild has been educating its member base on the benefits of appellation of origin and protecting the regions name by marketing a premium cannabis brand appropriately named True Humboldt. The California Growers Association and the Mendocino Appellations Project have been instrumental in getting legislation passed to encourage the development of this type of appellation control.

Growing the world’s finest cannabis is a complex skill set that has been carefully nurtured and passed down through generations secretly and at great risk. Beyond the typical growing conditions farmers face, there has been an entirely different set of obstacles in this clandestine crop. The very fact that Humboldt’s cannabis was grown in small batches, in secret and by a culture of people with a moral obligation to fight an unjust law is part of what makes it so unique. Protecting that heritage is a fight the farmers of Humboldt won’t give up easily. It’s in the terroir.

AOC dates back to the early 1400s when Roquefort cheese was first protected by the parliament. Similar to trademark protections, the concept of AOC is to control or protect the authenticity of products grown in a certain way, with a clearly defined set of standards and acknowledging its unique terroir. Terroir is a French term used to describe the land, the unique environmental factors that contribute to the crop ­— including the varietal, the weather and the farming practices. In modern law, most notable AOC designations were given to wine-producing regions, as the land imparted a certain flavor to the wine beyond the grape varietal. These subtle flavors were also influenced by the culture of the winemaker (traditional practices in each region), the timing of the pruning, harvesting and fermenting, the types of materials used to age the wine, the unique microclimates and even the plants and trees growing nearby. All of these components are aspects of terroir. Interestingly, other products given AOC designation are also related to the terroir, even if they are not crops. For cheeses, the terroir influences the flavor by the grasses that the sheep and cows eat and the earthen caves the cheeses are cured in. For meats, such as the Salt Marsh lamb, it is the salinity in the soil that imparts the flavor on the meat from that region. Some other examples of well-known products with geographical reference and their influence on the consumer are: Darjeeling tea, Blue Mountain coffee, Irish whiskey, Prosciutto di Parma, Parmigiana cheese, French lentils and Manuka honey.

The AOC is governed in France by the Institut National des Appellations d’Origine (INAO). Members of the INAO committee are ministers of agriculture, legal and finance interests and delegates from producing regions. The INAO consults with regional producers to define the geographical boundaries along with the standards and rules to qualify for appellation status. Once these standards are determined, the AOC details labelling requirements including allowable font sizes, acceptable uses of the regions name and the placement of a seal guaranteeing its authenticity. The INAO protects this seal like a trademark throughout France. These AOC designations are not protected internationally, so many countries enter into bilateral agreements directly with other nations or seek protection with organizations such as the World Intellectual Property Organization (WIPO), which has established nations that will protect AOC through the Lisbon Agreement.