Cate Be is All Fired Up 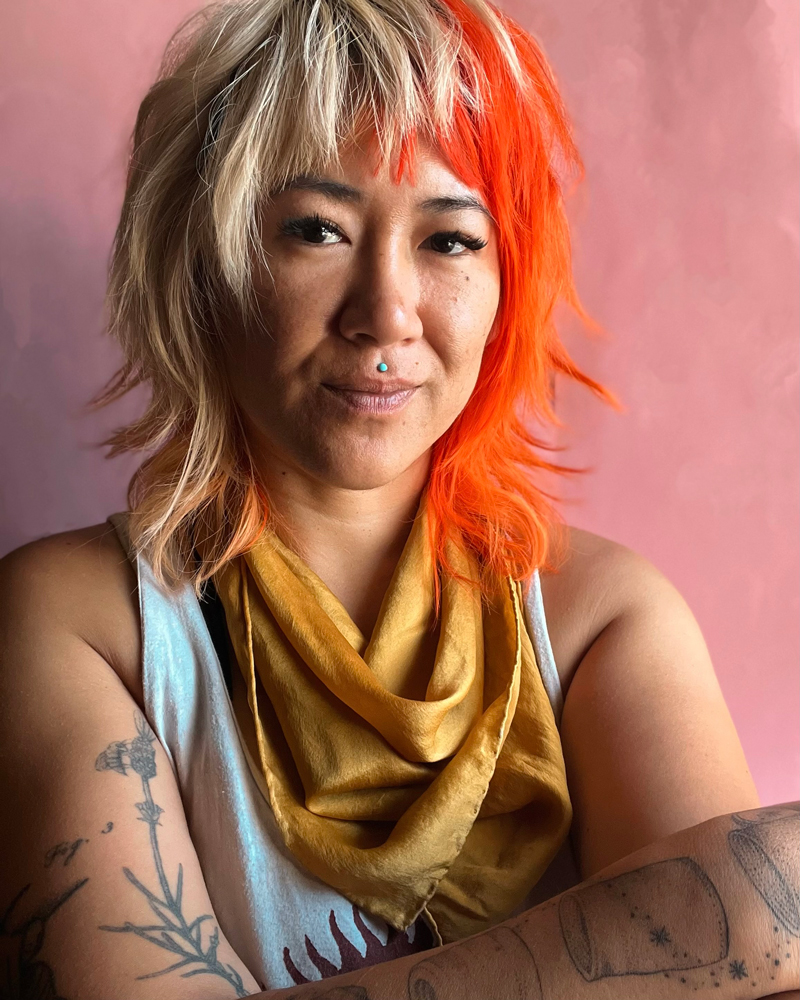 Cate Be never intended to be a ceramicist. In fact, she is probably more surprised than anybody that making beautiful works of clay art has become her job. A graduat

e of the ecological restoration program at Humboldt State University (now Cal Poly Humboldt), Be had already started a gardening and landscape business helping people create biodiversity on their land when she first got into clay. Her big plans included changing the world through environmental work when her path shifted on its axis.

Be’s dream was to serve in the AmeriCorps. However, when she went to apply, she learned that she was too old for the program. So the artist, who is of Cambodian and Salvadoran descent, altered her vision and applied to the Peace Corps, choosing to be stationed in Cambodia to connect with her paternal heritage. Unfortunately, those plans, too, were thwarted, leaving her depressed. Before moving into the scientific world, Be had spent over a decade as a performing musician. So, turning to something creative was a natural response to her grief over the botched plans. “I started leaning into clay,” says Be. “Not as a form of an income; it just felt good — it was different than plants and soil. It was a creative outlet and I needed that.”

At the time, Be was already sharing her world on social media through photos of gardening, mushroom identification and the like. Once she started working with ceramics, she began taking photos of what she was making. “Because I had most of my biology courses in mycology, I started drawing mushrooms on mugs. And not the typical amanita [the reddish-capped hallucinogenic], but like, regular mushrooms, like boletes. And I was drawing them to species. I was making mushroom anatomy mugs.”

A person with a large social media following her shared a photo on their feed one day and it introduced a whole new concept to Be. As her phone dinged with notifications of new followers, it suddenly dawned on her — people use Instagram to sell things. “Before that it hadn’t occurred to me. Because I was using Instagram to just show my little life, you know? All the sudden, while doing my landscaping business, I started thinking about pottery. I started cutting corners at my job so that I could go to the studio.”

Be chased the idea of becoming a paid ceramicist. She studied how social media worked, using hashtags and paying to be featured. But it didn’t generate much business. Instead, she had a change of heart. Rather than quitting, she dug deeper and let go of the sales model. She began creating pieces that spoke to what she, personally, was going through in life. “I decided, I’m not going to try to sell to the people with your typical redwoods and shit. I’m going to make work that’s for me.” Low and behold, that’s when her business took off. 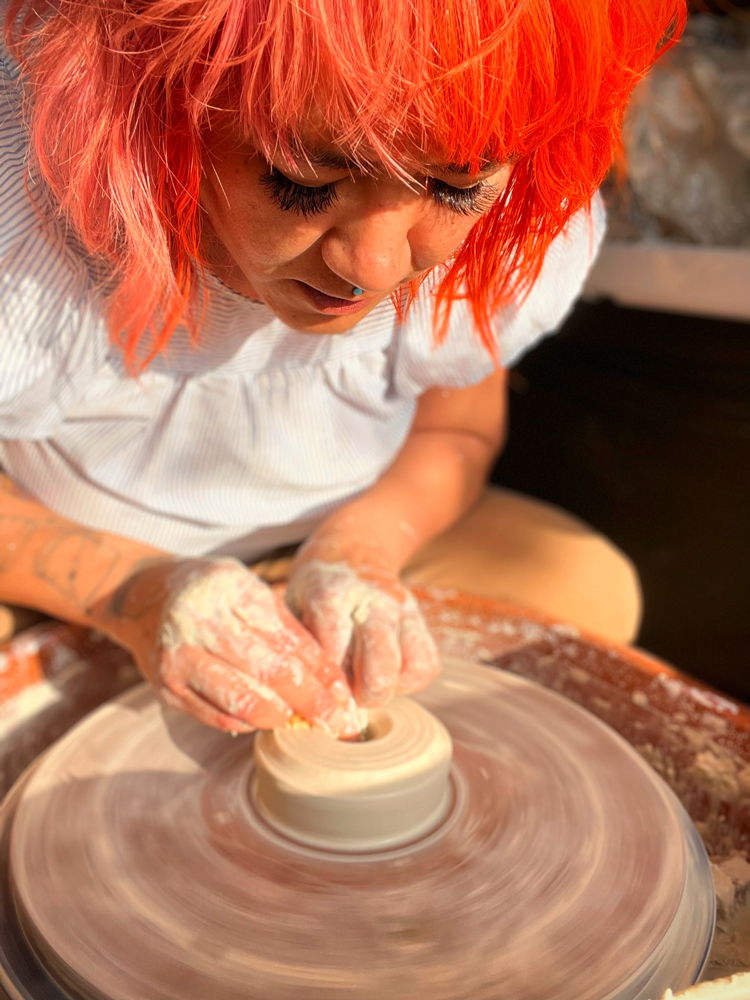 Although she had been working with clay professionally since 2014, Be’s success started taking flight in 2016. Using her own vulnerability and emotional processing in her art, people took notice. The breakup of a 12-year relationship led to experimentation with writing positive affirmations on her pieces. While she used the affirmations as a ritual process for her own healing, others resonated with the messages. Suddenly, folks began asking for her to make them the same pieces. This launched her line of Mantra Mugs. “My work has become more of a ritual, or a catalyst. I want it to be a tool that helps elevate you. I think of my pieces as therapy. It’s art that you can engage with.” 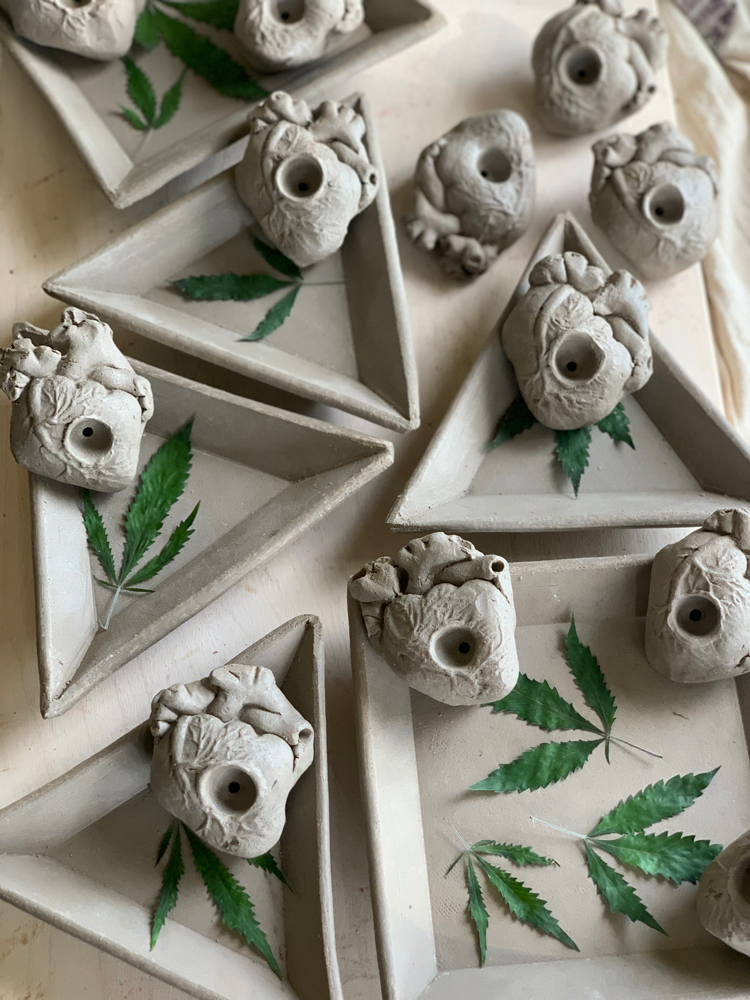 An avid cannabis enthusiast, Be’s work has from the beginning included cannabis related tools. In some circles, in fact, she is best known for her “Nug Mug.” As Be herself describes it, a nug mug is a multifunctional tool that you can both drink from and smoke out of, as it has a pipe carved within its body. Her Instagram page went viral when she showed followers how to use the mug and now about a quarter of all her sales are derived from cannabis tools. Be’s favorite part of her creation and what sets it apart from other similar mugs is that the pipe is in the wall of the mug, which means you don’t really see it and the piece still stands as art on its own, regardless of what it is used for.

Cannabis is a big part of Be’s life — as is self-care and making space for her own healing journey — and her cannabis-related artwork reflects all of that. She has molded mushroom pipes that are odes to her mycology background and pipes that look like delicious waffle cones piled high with scoops of colorful ice cream and a cherry on top. She crafts pocket pipes shaped like anatomical hearts dotted with gold stippling. For Pride month, she created the heart pipes with rainbows on them. She also makes ashtrays for joint smokers, some of which look like the redwood hot tubs she ritualistically soaks in at Café Mokka in Arcata. She has also made bathtub pipes as another nod to one of her important self-care rituals.

In speaking about her usable works of art, Be muses that she wants people to understand that you don’t have to smoke out of a regular old pipe and her products can be a special part of the cannabis ritual. “I want to elevate your smoking session, bring in some fun and make it part of your self-care and healing. My work is something you want in your sacred space.”

Cate Be’s works can be found on Instagram at @cBeCeramics or via her website cbeceramics.com or Etsy cbeceramics.patternbyetsy.com