Live painting has become a staple of Humboldt County festivals — both cannabis-related and otherwise — in recent years. Reggae on the River, Northern Nights and Cannifest, among a variety of others, have all featured live art. In fact, live painting seems perfectly suited to the festival scene. And why not? Executing a painting from start to finish “live” in front of an audience demands qualities such as spontaneity, freedom from inhibitions and the ability to act fluidly in the moment — all of which are characteristics that music festivals and, of course, cannabis elicit.

Yet, “every artist doing it seems to have a totally different take and trip,” according to Humboldt-based Matt Beard, who paints the surf up and down the California coast and has developed a busy sideline painting live. He says his best live painting experiences have come from painting alongside bands as they make music. “It’s like a crucible of fire for an artist.”

Like a live musical performance, live painting is a transparent process. Blake Reagan painted live during DJ sets at Northern Nights this year using ultraviolet light and reactive paints that popped under the concert lights, timing brushstrokes to the beat even as the DJ shaped that beat in real time.

Self-described “visionary” artist XAVI, who has been showing his art at music festivals since the early 2000s, believes live painting grew out of festival culture. The Earthdance festival and the band Sound Tribe Sector 9, he says, were innovators in this regard. Live painting at festivals “went viral,” says the artist, noting that dozens of festivalgoers were inspired to set up easels and canvases and paint to their favorite artists’ live music at certain events. “Kids responded to the idea that they could express their spirit, externalize their soul — be seen for the magic beings that they are.” 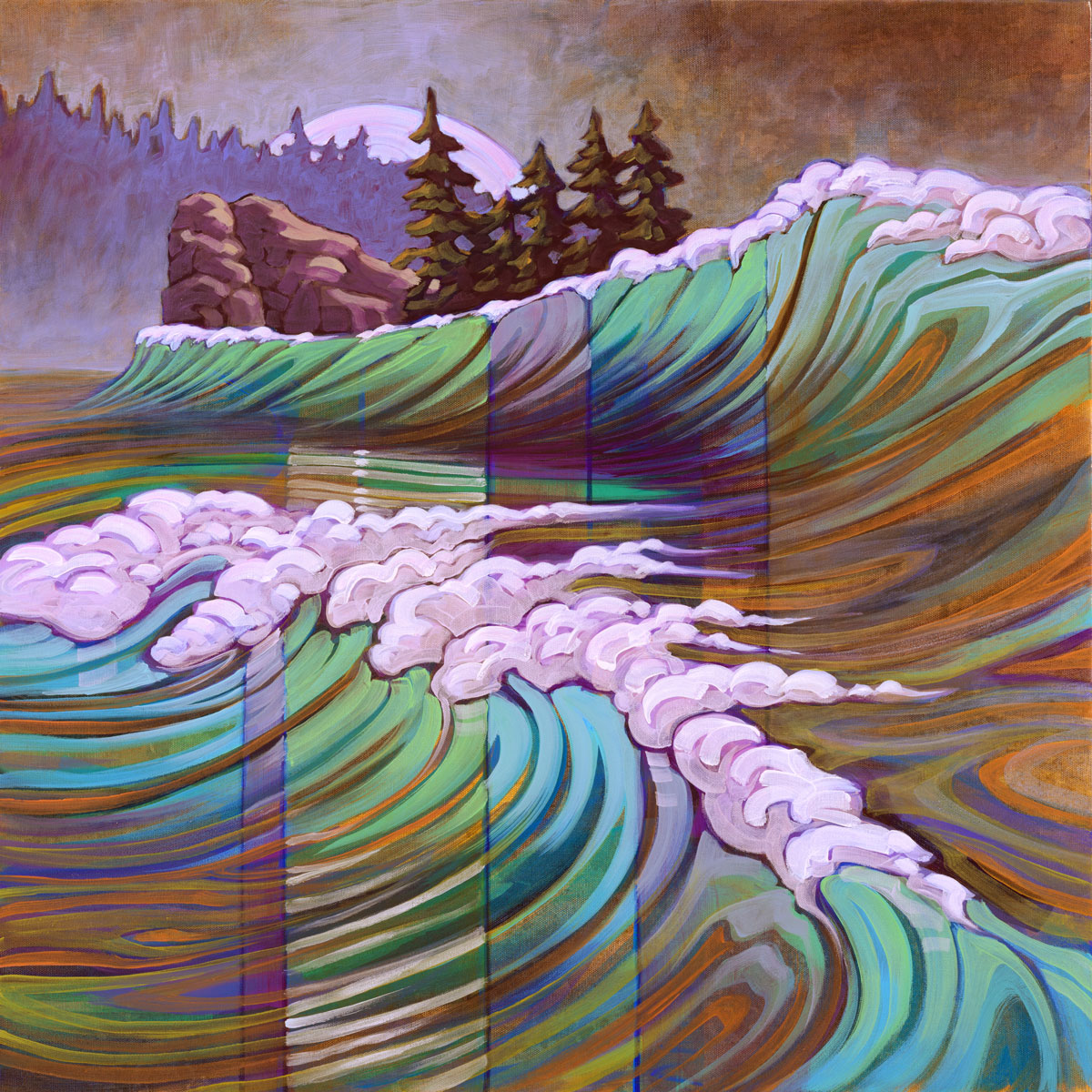 Live painting is not for the faint of heart. It poses challenges that artists are not likely to encounter in a gallery setting. Prerequisites include an ability to deal with the festival public. Having a healthy ego helps, too. “If people come say weird things, you gotta be like, ‘Hey, so what?’” Beard observed. While the ability to improvise is key to a successful performance, Beard also suggests that aspiring live painters need to be able to set some personal parameters. “I don’t necessarily always like the music that’s happening but it doesn’t matter. As long as there’s a human drummer, I’ll paint to it. That’s my criterion: I want to be playing alongside someone who plays music at a human pace — not trying to keep up with ‘beats ‘til you drop.’”

His usual approach is to “just let go, trust it, stay with the music.” But at times, “you can end up at odds with the music, where going with the flow is not necessarily what the painting needs. Like, there are moments when the tempo picks up but I really need to stick [with] something and it needs a little care.” And of course, not all live painting happens to music. Painting live at fundraisers presents unique challenges, not least “the pressure to make a good painting to help the cause.”

When everything goes well, the outcome can be memorable. Of painting live on New Year’s Eve at Arcata Theatre Lounge, Beard said, “What I love about painting there is the stage setup. Painters work on a platform adjacent to the stage. The band comes out and you can be there alongside them, so you really become part of the musical event. You got the music happening, the stage lights going, it’s rockin’.” This can be extra exhilarating because of how different it is from the painter’s norm. “Painting is mostly really private, and you don’t get to feel like a rock star very often,” Beard says with a chuckle. “But when you do, it’s fun.”

No one I spoke with claimed to know exactly when live painting was born but it seems safe to say its parents hooked up in the 1970s. One reference point is surely feminist artist Carolee Schneemann’s landmark 1973-76 performance artwork “Up to and Including Her Limits,” where the artist swung naked through gallery space in a tree harness while using charcoal and crayons to mark up the white walls surrounding her. (This work later inspired the character of Maude Lebowski in the cult film The Big Lebowski.)

Live painting owes a lot to television, as well. It is possible that the first person to paint live was art educator and television host Bob Ross, whose “happy little trees” and unfailingly positive outlook inspired countless Americans to believe they could express themselves meaningfully through paint. Precedent was also established by celebrity sports artist LeRoy Nieman, who rose to household-name fame in the 1970s by painting live on TV during major sporting events.

For all their successes, neither Ross nor Nieman was embraced by the art world of the day. In a similar way, live painting exists today in a genre “ghetto.” It is less easy to find a treatment of the subject in an art magazine than it is to find bloggers who proffer upbeat advice about how to do it. (One blogger writes, “If you want to do a performance painting of some sort, my top piece of advice is this: PRACTICE.”) Despite or because of its lack of fine-art credentials, the form has proven not only widely popular but also adaptable to an impressively diverse array of functions, including concerts, weddings, corporate events and fundraising galas.

Many viewers today are less interested in final products than in bearing witness to creative absorption. Live painting communicates an authenticity those audiences crave. Tokens of process, like drips of paint or fingerprints in molded clay, are not enough — viewers, in our post-truth moment, desire the reassurance of seeing a work of art take shape before our eyes.

Gabrielle Gopinath is an art writer, critic and curator based in Arcata.